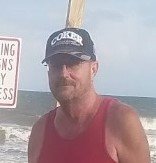 David Wayne Stewart, 61, of Camden, passed away on Thursday, June 3, 2021. Born in Gary, Indiana, he was the son of James Leonard Stewart (Georgia) and the late Barbara Webb Gates. David was a member of Lucknow Baptist Church. He enjoyed fishing and bowling and was an avid NASCAR fan. His family described him as a homebody with a big heart who was always loving and giving.

In addition to his father, David is survived by his daughter, Tabitha Stewart; siblings, Michael Stewart (Andrea), Joanne Galloway (Donovan), and Terri Cotton (Bert); step-father, Johnnie Gates; his aunt, Pam McConnell (Larry); as well as 4 grandchildren and many nieces and nephews.

A memorial service will be held at 2:00pm on Wednesday, June 9, 2021 at Powers Funeral Home, officiated by Rev. Keith Allison. The family will receive friends at the funeral home following the service.

Memorials may be made to Lucknow Baptist Church, 899 Hubb Kelly Road, Cassatt, SC 29032.