What to Expect at a Military Funeral 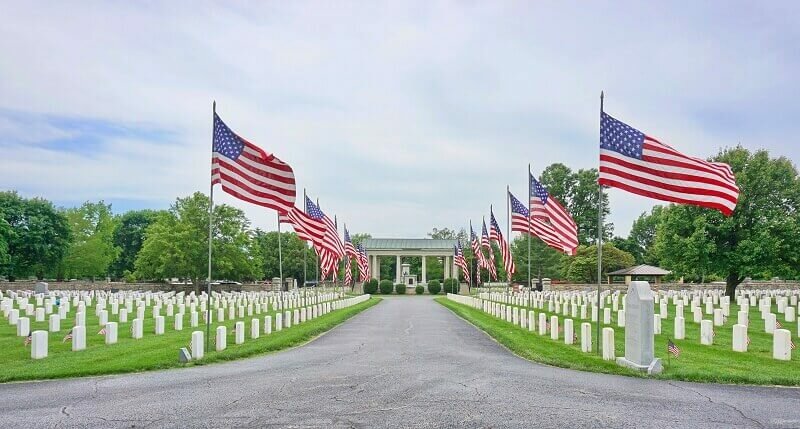 Many people may fear going to a military funeral for several different reasons. One may be that they have an actual fear of things such as death and caskets. Others may be nervous about seeing distant relatives they have not seen in many years. However, the most common reason people are anxious about attending a military funeral is that it is their first one and they simply don’t know what to expect. As directors of funeral homes in Camden, SC, we understand this so we are sharing what you need to know so that you can feel more comfortable.

What is a military funeral?

A military funeral is a service that pays honor and respect to the deceased for their service in the armed forces. These funeral services can differ slightly depending on the length of time the deceased served as well as what branch they were in.  In any case, there will be representatives from the branch at the funeral and they will perform certain acts and ceremonies as part of the service.

Who is entitled to a military funeral?

The following people are qualified for military funeral rites: military personnel who pass away while on duty. Veterans who have served in the military, navy, or air force on active duty and have received an "honorable" or "under honorable conditions" discharge.

What is appropriate to wear to a military funeral?

Civilian guests should be dressed in appropriate attire. This means nice, business attire or formal attire much like you would if you were attending a church service. For the most part, men should wear dark suits or at the very least slacks, a dress shirt, and a tie. Dresses, suits, or skirts and blouses should be dark for women. Other dark colors such as dark grays, deep greens, etc. are acceptable.  Make sure to have minimal jewelry and other accessories. If there is seating it is reserved for the immediate family and those who may need to sit due to age or a disability. Know that you may need to stand for the entire committal service.

Depending on various factors, the ceremonies and honors may differ. However, every military funeral will have the minimum of the following:

Flag ceremony - This is a process where the United States flag is folded into a triangle with the blue and stars visible on the outside.

Presentation of the flag to the family - After the flag is folded, the representative from the military will present it to the spouse, child, parent, or next of kin and thank them for their loved one’s service.

The playing of Taps - This will be played on a bugle or trumpet and is also called “Day is Done”, and “Butterfly’s Lullaby.”

Why are there 3 shots at a military funeral?

The custom of stopping the fighting to remove the dead from the battlefield has its roots in the firing of three volleys over the grave of a fallen soldier. Three-musket volleys were fired to indicate that the battle might restart after the dead had been evacuated. Traditionally, a firing party of seven service members fires the volleys. It is not a 21-gun salute if a firing party consists of only seven military personnel firing three volleys.

Additionally, it has been proposed that the tradition might have older origins. A funeral was considered to have taken place in Roman culture when the coffin was covered with soil three times by mourners. Additionally, they would say goodbye three times after calling the deceased by name three times.

What's the difference between a 21-gun salute and a 3-gun salute?

A three-rifle volley is defined by the American Legion as "three volleys fired by no fewer than three rifles and no more than seven rifles in remembrance of the departed." A 21-gun salute, which is only given to leaders of state like the president or a past president, substitutes a battery of artillery pieces for rifles.

Military funerals are very special to attend. The deceased is being honored in a way that is full of respect and the pomp and circumstance of it all can leave you with goosebumps. It is truly a powerful event and should be treated as such. As directors of funeral homes in Camden, SC., we hope that this information has allowed you to feel a little more confident and comfortable about attending your first military funeral with honors.

Are You Using One of These Excuses to Put Off Preplanning?

Ask anyone if preplanning your final arrangements is important and just about all of them will agree that it is. Yet everyday people put off this important task thinking they will get to it “later”...

Coping With Grief: Where to Find Support

Grief and the loss of a loved one can be an extremely challenging thing to get through. Your world may feel like it has been flipped upside down and you simply don’t know which way is up. It is dur...

What to Say After A Death

You are in your yoga class and you see your friend return for the first time since their father passed away. You start to feel nervous. You want to talk to them but what do you say? Do you mention ...

How to Wear Your Wedding Ring After Your Spouse’s Death

Losing a spouse can be devasting. You may struggle not only with feelings of sadness and loss but who you are now without this other person as part of your world. Trying to figure out this new real...

What Are Cremation Fireworks?

Fireworks are part of many of our holidays and important days. We see fireworks on the 4th of July, at weddings and parties, and even in parades and football games. With fireworks being something t...

What Is a Double Funeral?

People have heard of double weddings, but a double funeral? Even though this idea may seem strange, double funerals are actually not that uncommon in certain situations. Directors of funeral homes ...

Different Types of Services for Your Loved One

Just about everyone is familiar with funerals. Even if they have never attended one they are aware of what they are and what purpose they serve. However, there are several other types of services t...

When choosing a headstone for your loved one’s grave, you will have many decisions to make. Other than the design and embellishments you wish to have, one major element to choose is what material t...