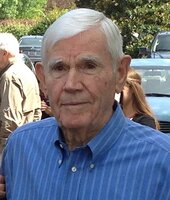 CAMDEN – A graveside service for Alton Gardner Campbell, 94, will be held on Saturday, July 30, 2022, at 10am at Malvern Hill Baptist Church Cemetery.

Mr. Campbell passed away on Tuesday, July 26, 2022. Born in Patrick, S.C., he was the son of the late Thomas Newman Campbell and Mabel Johnson Campbell. He was a member of the Masonic Temple of Camden, the Camden Hi-Steppers, and the DuPont Bowling league.  He was the last surviving member of the Ruby High School class of 1945.  Mr. Campbell grew up in a farming family and continued to garden his entire life with family and friends being on the receiving end of his many bountiful harvests.  He was a NASCAR fan and was able to do a ride along for his 85th birthday.  In addition, he attended the inaugural Southern 500 on September 4th, 1950, at Darlington Raceway.  He retired from DuPont after thirty-three years.  Prior to this he was a firefighter with the South Carolina Forestry Service and proudly served in the United States Army during the Korean War.  He was a longtime member of St. John's UMC and the Lee Fellowship Sunday School Class.

The family would like to thank Dr. Carl Kearse, Dr. Paul Christenberry and the caring and supportive staff of the Karesh Wing for their compassionate care.